Posted on October 19, 2017 by melissastacythoughtcandy

Today, I ate a piece of buttermilk pie, drank a cup of coffee, and visited the Davy Crockett Tavern and Museum in Morristown, Tennessee. My husband and I drove to Tennessee to spend a week with his family, since it’s been four years since we’ve seen his siblings, their spouses, and their children. So far, this has been a very good trip. I’ve been socializing a lot, which feels strange, since I was a hermit all summer, writing another book. Greg’s family has been super kind about humoring me, and taking me to all these historical sites I want to see.

Here is a photograph I took of the recreated Davy Crockett Tavern, which is a much larger building than the real tavern would have been — 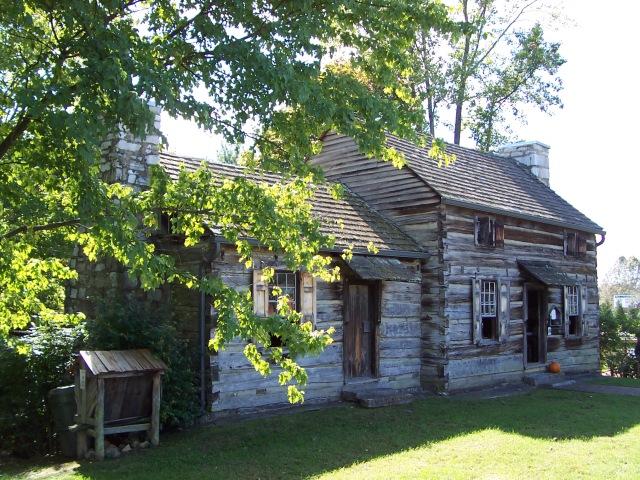 See how green those leaves are? Yeah. Eastern Tennessee is exceedingly pleasant this time of year. I love how warm the weather has been. Two days ago, I visited the General Longstreet Museum in Morristown, a Civil War site in Tennessee, so I know some of these valleys dropped to 29 below zero in the winter — cold enough to halt battle sometimes — but right now, the temperatures here are like the late-May weather where I live in southwest Colorado.

The state tree of Tennessee is the tulip poplar, and there is a beautiful tulip poplar growing behind the Davy Crockett Tavern. A few years ago, lightning split the bark in half (a vertical slice running the length of the trunk), but the tree has survived with the help of the staff, who seal the bark with black paint to keep the bugs out.

Also behind the tavern is this all-purpose shed structure, which includes a mossy-roofed covering for an original 1790s Conestoga wagon — 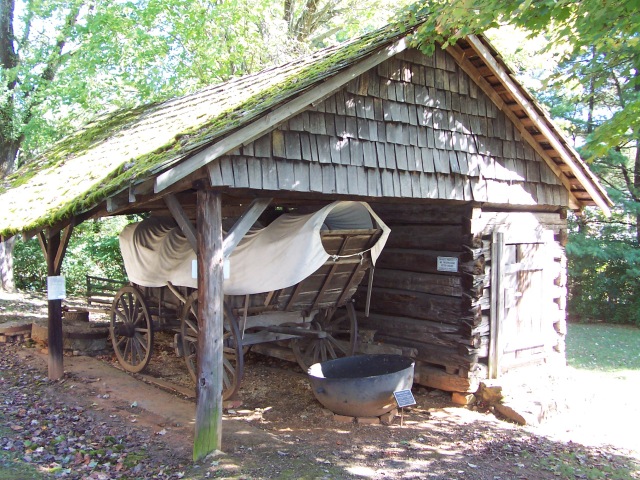 The museum bought this wagon from a place where it lay in pieces, and then the staff repaired and reassembled the wagon on site. I don’t know if you can tell from the picture, but the base of the wagon is curved, which made it easier for transporting across water.

The large pan on the ground is a hog boiling cauldron. After slaughtering a pig, the body would be boiled for a time in water, which made the hair easier to scrape off the skin. People used “everything but the oink” when they butchered a pig, goes the saying — and I’m grateful I don’t have to spend my days slaughtering hogs.

After the guided tour at the tavern, we also drove to a campground which now houses the original cabin where Davy Crockett was born — 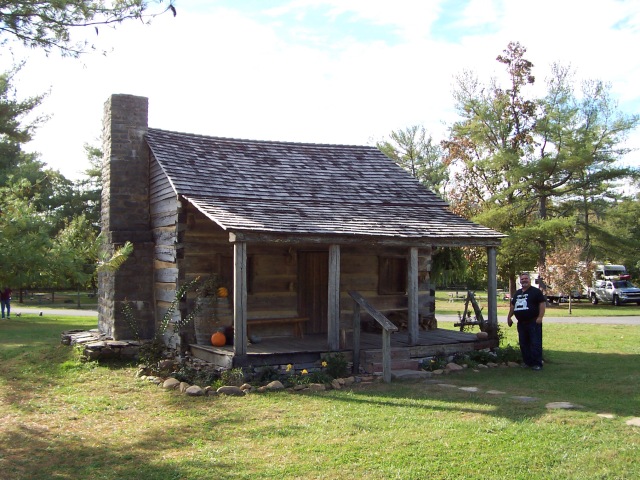 You can see my husband standing beside the house in that picture. The pickup and trailer behind him are some folks parked at a campsite.

Here is a closer photo of Greg, which also reveals some better detail of the house. The chinking on these cabins was made with sand, clay, horsehair, straw, and other materials, pretty much whatever was handy —

I asked Greg if he could point out a hemlock tree for me, and he said hemlock trees didn’t exist. I said, yes they do, hemlock are one of the most common trees of eastern Tennessee and the Appalachian mountains, whereupon Greg whipped out his spiffy smartphone and googled it.

He soon discovered that hemlocks *do* exist (and no, the trees are not poisonous). Hemlocks are a type of pine tree with short, blue-green needles, and after Greg examined a photograph online, we did find many hemlocks to sniff. I love the smell of hemlock needles, so I sniffed many of them. 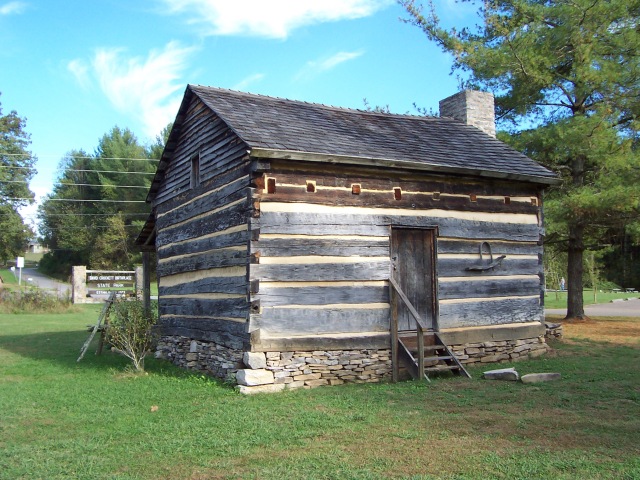 Someone has nailed up a yoke to the right of the back door. Greg said it’s an ox yoke. There were ox shoes on display at the Davy Crockett Tavern and Museum. There was a *lot* of stuff in that tavern and museum — it was utterly awesome. If you haven’t been there before, and you find yourself in the area, I definitely recommend visiting. Our entry fee today was $5.00 for each adult.

I’m not the best person to travel with, since I don’t have a smartphone, I’m using an outdated road atlas from 2007 because I’m too lazy to buy a new one, and I generally whine a lot if I don’t get nice things to eat, like jambalaya and green tomato gravy-smothered grits and homemade spaghetti and meatballs.

But while I might be a lazy whiner, I can be a good talker when called upon to converse, and I like talking about history. Davy Crockett is a fascinating person. As a member of the U.S. Congress, Representative Crockett split with President Andrew Jackson over the removal of Native Americans from their ancestral lands — but then Davy Crockett went to Texas, and fought for Texan independence from Mexico.

Why did people in Texas want freedom from Mexico? Yeah. Slavery. Ugh. Not that Mexico is a perfect country, but at least they’d already abolished slavery there.

None of this slavery stuff was up on display at the Davy Crockett Tavern and Museum, but I can’t “Remember the Alamo” without remembering one of the biggest reasons that inspired the fighting.

Greg and I drove to Austin, Texas, in May of this year, and I spent a lot of time at the Texas State Capitol building — on the side lawn of the State Capitol, to be exact — which now holds this beautiful piece of art — 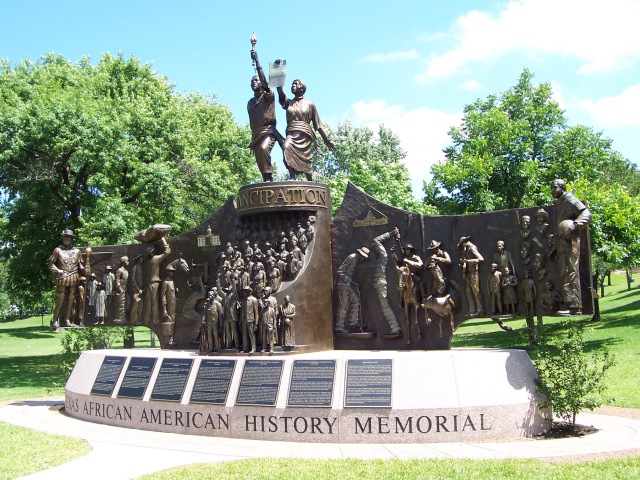 Flanking the main entrance and mall leading up to the capitol building are monuments to Civil War generals, cannons, and other Confederate memorabilia. I took pictures of those monuments, too.

But today, standing in eastern Tennessee, contemplating the life and times of Davy Crockett, the Texas African American History Memorial was the one on my mind.

I also spent a lot of time thinking about human migration patterns — with a special fixation on comparing the movement of immigrants from the Old World to the New with the modern-day rise in urbanization all over the world, as people leave rural towns to live in cities. Today, I thought about the landholding urban class of the 1700s, and the landholding urban class of 2017.

Modern American pioneers are still people like Davy Crockett — country people who learn how to bridge the divide between living in the rural backwoods and urban life. Sometimes people think modern life has changed “so much” from “the good old days,” but the storyline of starting out in humble beginnings to claim a place of power in the city (or in many cities — plural) is certainly the backbone of the United States.

The divide between rural and urban life is much, much older than the United States — and the difference in the social hierarchy between those two settings has always been there as well. The Founding Fathers/Framers of the U.S. Constitution certainly knew this. Modern politicians certainly know this. My conservative family members who advocate for states’ rights certainly know this as well.

My week has been full of political conversation. I like those discussions a lot. We haven’t been talking about the current news cycle, but history and government in general. With sprinklings of psychology and philosophy thrown in for good measure.

Our first night here, we gathered as a big family around a fire in the backyard, and Greg’s brothers played their guitars and sang beautiful country and rock ‘n’ roll songs that made everyone want to sing along. The day had been warm, around 82 degrees, and the night air was cool but not cold, out under the stars.

Tomorrow, Greg and I will be leaving Tennessee for northern Ohio, to visit more family members who live close to Cleveland. I’m taking many fond memories of eastern Tennessee with me when we go. The landscape is so gorgeous here. And there’s plenty of banana puddin’ and sweet tea, brisket and biscuits and buttermilk pie. My belly has been exceedingly happy during this trip.

This entry was posted in Uncategorized. Bookmark the permalink.